The first and most important Catan Strategy is knowing what you want to build. This will dictate which resources you should go after when you place your starting settlements.

In addition, this would also give you a pretty good idea on how you would want your game to progress.

There are three main strategies you can focus on:

Settlements and Longest Road - Your essential resources would be high amount of Lumber, Brick and some amount of Wool, and Wheat.

Hybrid Expansion  - Occupying as much as you can of the map thereby acquiring more resources. For this strategy you will need to produce a balanced amount of all resources.

Cities and Development Cards - For this strategy, your main resources would be Wool, Wheat, and Ore

Trade 2 of a Kind - You will need a 2:1 port and a high concentration of that resource.

With these in mind, and the map layout, identify which strategy will be easier to execute.

Colonist is one of those online games that not only requires a keen eye in strategy, but also good sense in resource management.

That being said, having access to all of the resources is not only important, it may also lead to your mid and end game phases becoming a trivial matter.

Between your two placements, try your best to have access to each needed resource.

For example, if you place on a Lumber-Brick-Wheat combination, your next placement should preferably have Ore and Wool together. This is where complementary placements come in.

If you plan ahead and look at complementary spots on the board, then you might just score two spots that work in harmony with each other and give you all the resources you need.

PRO TIP! If you're going for the Longest Road strategy, you won't need ore that much. You would need bricks though, so make sure you are producing a lot!

With that in mind, the next most important aspect of starting placements to take into consideration would be: Numbers.

Now, now, you don’t need to be Pythagoras nor Einstein to figure this out.

I’ll make it easy for you: be on as many different but high numbers as you can.

Say you’ve found two potential spots that will give you all your resources, only this time, you notice that both the spots have the same numbers!

This means that you’ll produce well if any of those numbers roll, but it also means that you would only collect resources from three different numbers.

I mentioned this earlier: Colonist is a resource management game. But there won’t be anything for you to manage if you’re not producing resources.

Also you don’t want to overproduce resources which can’t be used and then lose them to a 7 roll.

These are all good numbers, and you’ve got a variety, meaning that you’re more likely to collect on any given roll.

It’s not always possible to get good number variety, and you will more often than not have a duplicate number, but it’s important to be as diverse as possible.

PRO TIP! Aside from the numbers on the hexes, always check out the dots at the bottom as well. A hex with 5 dots would be the best choice. So count your dots!

While placing the first settlement. Going for scarcity is usually a good option. This means that if there isn’t much of a certain resource and you can monopolize that resource do it.

Trading that resource to others will be a piece of cake since they will not be able to obtain that resource easily with other methods.

Sure, it sucks not to have first pick in resources or on number placements. Sure, Blue is a prick. But that’s alright.

Sun Tzu said: Knowing is half the battle. Or was that G.I. Joe?

Whatever, the point is being able to know what your opponents are planning to do is crucial in winning at Colonist as well!

Which is why it’s important to be wary and observe where everyone else is going.

If you’re the last person to place, you’ll have your neighbors placing their settlements before you can put down your second.

It’s not unlikely that they will take one of the awesome spots you’re looking at. What you can do then is to take some preventative measures by observing their movements.

At times, your placement will have a spot on the board that nobody else needs, which will remove the pressure from having to worry later whether it’ll be robbed.

Of course, this is highly contextual and will depend on each game session.

However, looking at your opponents’ spots might just open up opportunities that were not visible to you before.

PRO TIP! Target rare resources early on. Check for resources on the map that have very low numbers on them.

For example, if all the Bricks on the board are on low-yield numbers like 2-3-4, then that’s a rare resource. Work on acquiring them early on.

5. Work on Expansion as Your Main Focus

Settlers of Catan is a game of conquest. Gaining as much territory as possible is one of the essentials in winning the game.

The key to effective expansion is the placement of your roads. Always remember to point your roads outwards if you’re planning to employ an expansion strategy.

Oftentimes, if your placement puts both numbers and resources in your favor, you can get away with hunkering down a corner of the map.

That said, making sure you have room to grow is a very wise thought to have, as you might find yourself boxed in if you neglect it during any of your placements.

This is where the road placement comes in very handy. Placing your first roads is actually very important, as doing it wrong can set you back a few turns.

Just make sure that your road points to a spot on the map that you can move out to, even if the resource production isn’t high.

A common error to make is pointing the road to a goldmine of resources and numbers, only to have your neighbor place there next turn, making your road a dead end for you.

PRO TIPS! If you’re one of the last players to place, try not to place roads towards valuable resources on the map. There's a pretty good chance that other players are eyeing them as well and will steal it from you during mid-game. It is rare for people to place starting settlements from the outside going inwards.

6. Ports for High Concentration of the Same Resource

Waterfront properties are valuable. Both in real life and in Settlers of Catan.

Owning one makes the bank love you. To the point that they’ll be willing to trade for less resources.

This is why ports play an important role in The Settlers of Catan.

Having the ability to trade 2:1 can win your game, so looking at the available ports on the board during your first placement is critical.

More often than not, it’s difficult to find ideal port placements in the onset of the game, but sometimes there’s that magical spot of paradise. So take it!

Of course, the high number resources that are next to their respective ports are extremely valuable.

One brick port on an 8 Brick slot will give you immediate, priceless trading power. There’s also the possibility of bagging a complementary port.

If your board has a Wool port that’s not connected to a Wool hex, and you happen to have a 6 Wool in your first placement? Then occupying that port might just benefit you.

The jackpot is when you can occupy a good port on two hexes that compliment your initial placement.

Having that occur is rare, though, and occupying ports should only be a priority if it’s advantageous for you.

Because in exchange, you are losing another resource and number by doing so.

That means you’ll have to determine which is more important to you having a port which will make trading with the bank easier or having access to three different resources in your placement.

If it’s the former, then settling near a port can be a wise alternative since it would give you the opportunity to grab it pretty quickly.

Overall, placing your starting settlements wisely will give you a huge advantage in Settlers of Catan. But this is just one of the many strategies that can be employed in the game.

It is very hard to employ all these tactics in every game though, as the board is arranged randomly by the system and your neighbors choices restrict yours.

However, having a good grasp of starting positions and initial placements will help greatly in winning you your next Colonist game.

Have a great starting strategy you want to share or want to see more strategies? Check out the comments in this reddit thread. 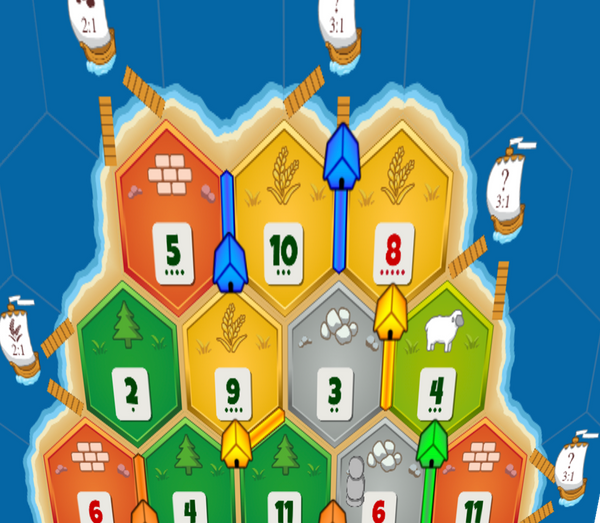 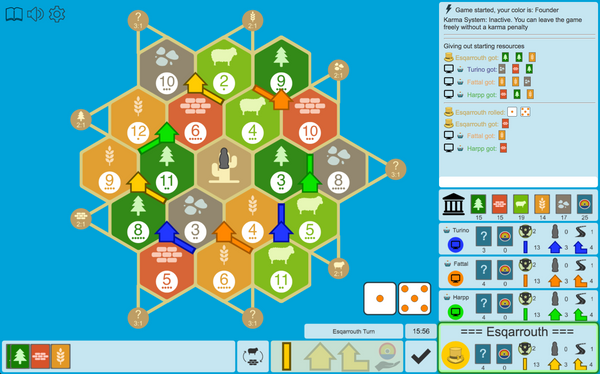 Dust off your boots and mark your calendars, Settlers. The second edition of Colonist Tournament happens this November 10th! Colonist Championship is a Settlers of Catan tournament hosted by the online game Colonist.