The Settlers of Catan, or just Catan, is a board game designed by Klaus Teuber and published by Catan Studio, a German company.

Catan was seen as one of the first Eurogame made in Germany to become famous outside of Europe. More than 27 million copies translated into 30 different languages had been sold as of 2019.

The game sees players immersing themselves in deep strategic thoughts, despite the game’s mechanics being very simple to learn.

In Catan, players take on the role of the chief of a settlement. Each player would then attempt to build and develop territories and acquire resources.

As their settlement grows, each player gains victory points and the first to get 10 VPs, wins.

One victory point is given for each settlement and two for each city a player owns own. Other achievements like establishing the longest road and the largest army (by playing the most knight cards), grants a player additional victory points.

To date, there have been many Settlers of Catan expansions that aims to enhance player experience and game variety. The most popular of these are: 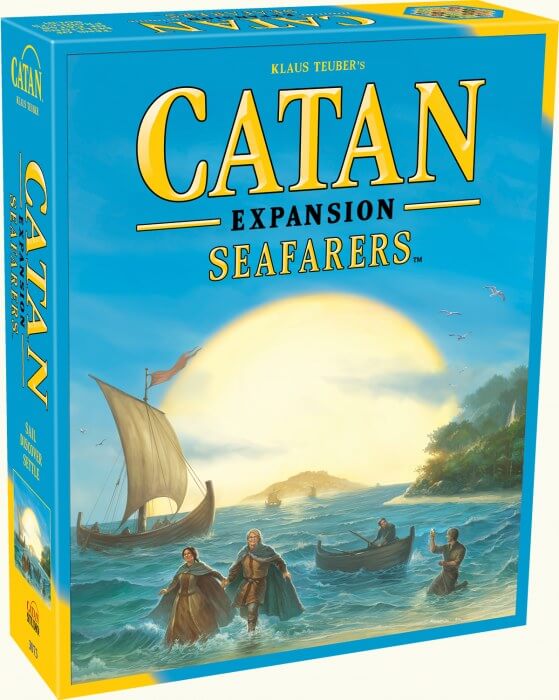 The first Catan Expansion, Seafarers was released in 1997 and adds ships and exploration into the game. Teuber originally planned to have this in the base game but found it too problematic to implement.

It can be extended further using the Catan: Seafarers 5-6 Player Extension. A number of independent scenarios designed specifically for this expansion is also available. 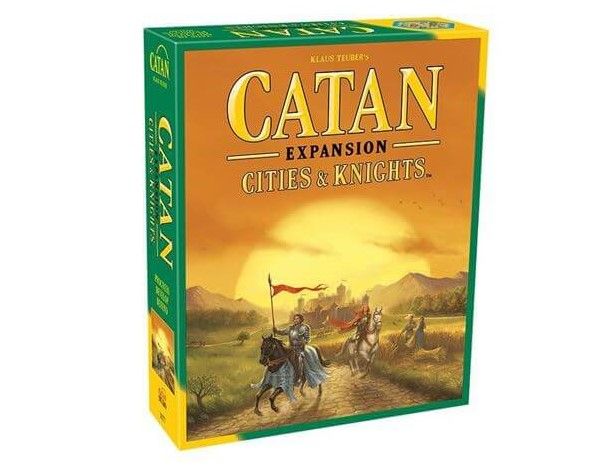 This expansion was released in 1998 and redirects the game’s main theme from expansion to city-building.

Considered to be the most advanced expansion for Catan, Cities and Knights has the infamy of not being able to combine well with other scenarios and variants.

It can further be expanded with the 5-6 player extension for more complex scenarios. 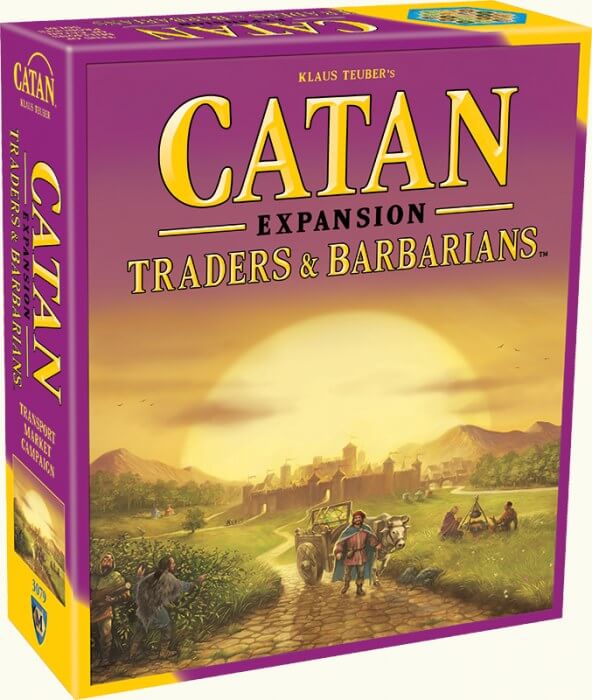 This expansion adds the option to play with only 2 players among other features. This expansion also introduces new options for the game like a harbormaster, a friendly robber, as well as in-game special events.

New wooden pieces and board tiles are also added including the ability to link different games to create unique campaigns. 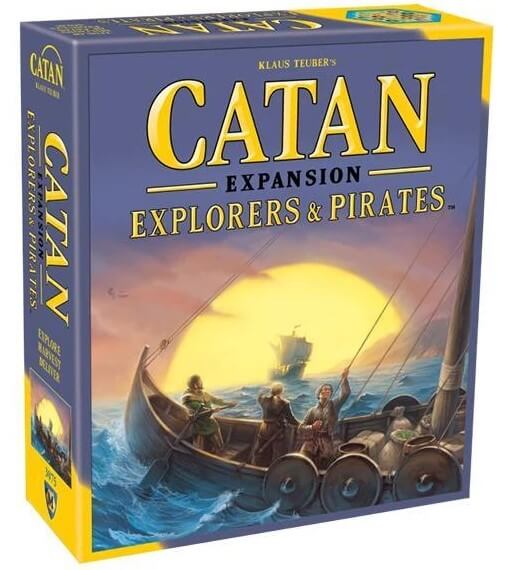 The fourth and latest expansion of The Settlers of Catan was released in 2013. It includes 5 building scenarios and introduces new elements to the game.

Despite its similarities to Catan: Seafarers, Explorers and Pirates has a number of new additions like harbor settlements, crew members, pirate lairs, among other things.

It can also be expanded with the 5-6 player extension to further enhance the game’s experience.

Several variants and scenarios were released for the Settlers of Catan base game and its expansions. These are:

Legend of the Sea Robbers. This scenario sees a linear story unfolding over 4 chapters. It also introduces the Council of Catan: an organization that gives players special tasks to work on for the benefit of your clan. It also opens up new regions through the road and settlement building.

Crop Trust. This scenario introduces an organization named Crop Trust into the base game and sees players needing to cooperate with to alleviate the struggle for seed diversity.

It sees players balancing their need to harvest crops versus the need to store seeds for future use.

More like a ‘small expansion’, Helpers of Catan adds the computer opponent characters from the PC/Mac video game Catan - Cities and Knights as “Helper Cards” which can be used during gameplay.

Experts on the game say that Catan Helpers adds aspects of Cities and Knights to the Catan base game without making it overly complicated.

Frenemies. An overseeing body: Catan Guild, will reward players with favor tokens whenever they commit acts of good will like give away resources to players lagging behind, moving the robber piece to isolated locations, as well as connecting roads for opponents.

Catan’s popularity led to the creation of spin-off games. Some directly connected to the game and some to popular titles in pop culture. The most notable of these are:

Starfarers. A newer version of Starfarers of Catan, originally released in 1999, that contains completely new designs and game materials, revised rules, and a game board that brings variety to space exploration.

A Game of Thrones Catan: Brotherhood of the Watch. Players will take on the role of Brothers of the Night's Watch. Using resources to build roads, settlements, and keeps as well as acquiring guards for their patrol or buying development cards, this game is a struggle to strengthen their hold on the north.

Star Trek: Catan. Players will start the game with two small Outposts at the intersection of three planets, with each planet supplying resources based on the result of a dice roll.

Players need to collect and trade resources, namely dilithium, tritanium, food, oxygen and water – and use them to build Starships that connect areas in the galaxy, establish more Outposts and Starbases (which functions like Cities in Catan) at new intersection points to increase resource acquisition, and acquire Development Cards that provide Victory Points (VPs) or unique abilities.

The Dawn of Catan Online

The Digital Era saw a huge number of Catan video games released in the market.

A few titles worth mentioning were:

None of these games however, were comparable to the official Catan online game: Catan Online World. Popularly known as PlayCatan.

PlayCatan was met positively by both fans of the original board game as well as new players who got into Catan with this online version.

The game managed to revolutionize Catan board game and bring it to its players screen via online play. The niche was no longer isolated to board game enthusiasts and it saw a huge influx of new players online.

However, the golden era of Catan did not last long. PlayCatan’s service was terminated on January 2016. Much to the dismay of fans of the original board game and the online title.

April 2017 saw a new online game rise from the ashes of PlayCatan: Catan Universe was launched.

These improvements and features opened up new avenues for players and was met with much excitement by fans of the popular board game.

Their excitement was unfounded though, as Catan Universe was plagued with bugs and gameplay issues which players deemed unworthy for an ‘improved version’ of PlayCatan.

Catan Universe has one of the highest negative reviews on Steam, at the bottom 0.2% of all games.

Catan Universe was generally panned by long-time fans of Catan, and it is now seen as a shadow of PlayCatan’s former greatness.

Richard Dansky, a writer and a designer of both computer games and role-playing games commented in his Hobby Games: The 100 Best article:

"...for all of its elemental simplicity, The Settlers of Catan has breathtaking depth and breadth of experience. It's a resource-management game, defined by position and strategizing. It's a social game, defined by horsetrading of resource cards and 'Siccing the Fritz' (as my friends call the robber) with bloodthirsty bonhomie. It's a game of chance, ruled by dice rolls and card draws. It's a hardcore game and a light social pastime and everything in between, a laboratory where I can test a hundred different play styles and a genuine reason to invite friends over."

The Washington Post dubbed it “the board game of our time” in an article published in 2008.

Going Cardboard, a 2012 American documentary film discusses the game’s impact on American gaming communities and beyond. 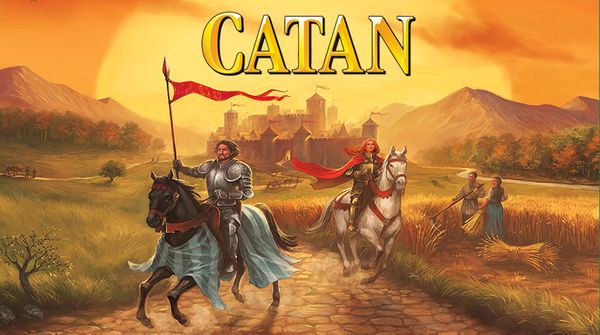 Let us show you the stratagem that will surely make you win your next game of Catan. Then practice these strategies out through quick games on Colonist.io! 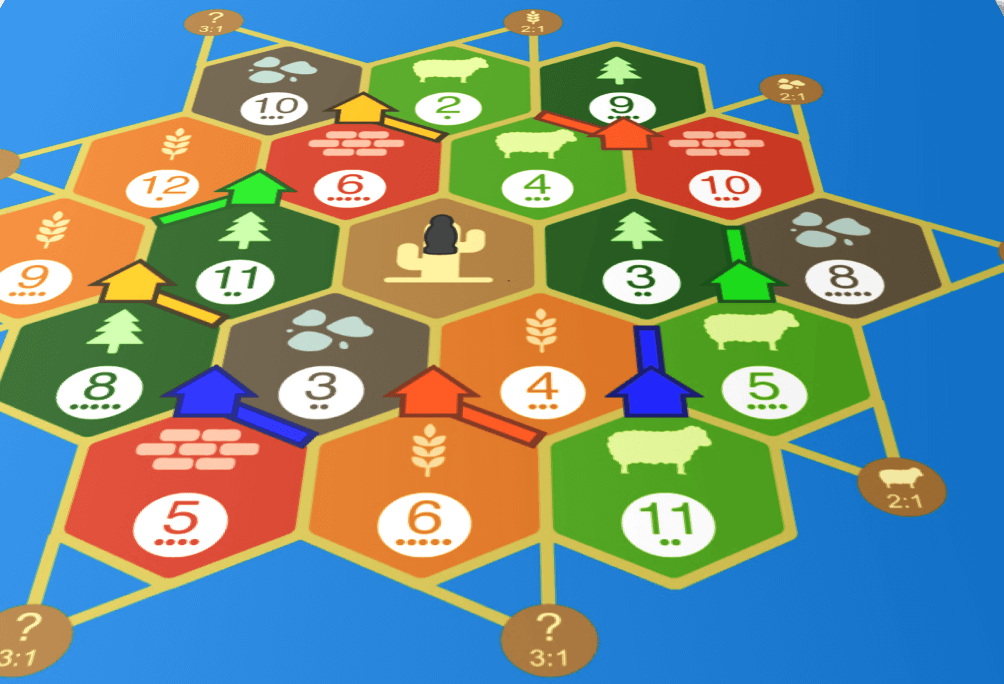 Colonist is an online browser game created to be an alternative to Settlers of Catan, one of the most popular board games ever created.

Colonist Strategies
—
Introduction to Settlers of Catan
Share this