With the release of the Cities & Knights expansion, Colonist.io now allows an even wider range of strategies for you to choose from. Cities & Knights adds a variety of new rules to the base game, including progress cards, commodities, barbarians, and even the ability to move your knights and chase away the robber in order to control different areas of the board.

As you would expect, these rules can sometimes be misinterpreted when playing the board game in real life, so this article aims to help clear up any confusion surrounding them. For anyone looking to learn how to play Cities & Knights the right way, why not try out Colonist.io today!

In the base game, any player holding over 7 cards is forced to discard half their hand, and then place the robber on a hex of their choice, stealing a resource from a player with a settlement or city touching that hex. The difference here is that in Cities & Knights, you cannot move the robber until after the Barbarians attack for the first time.

This is an easy rule to overlook, as the robber is such an important part of the game. Whether you have grown to love or hate seeing a 7 rolled to steal a resource, this rule is in place to allow you and your fellow settlers some breathing room before the Barbarians arrive for the first time.

Since Colonist is customizable, for those of you who want to play with their house rules, feel free to create a suggestion for your house rule in our suggestions board.

The City Wall is a great way to protect yourself from losing half your cards when a 7 is rolled, since it allows you to hold an additional 2 cards for each City Wall you have on the board (up to a maximum of 3 city walls, and one city wall per city.). Although you may think that the City Wall would also protect you against a Barbarian attack, this is not the case. If you activated the least number of Knights and Catan was defeated, you must remove your City Wall along with your City, and place a settlement instead.

Largest Army is not part of Cities & Knights expansion. Instead, the player with the most active Knights on the board when the Barbarians are defeated, gets awarded Defender of Colonist, worth 1 victory point. There is no limit on how many Defender points a player can earn.

Rolling a 7 while having an Aqueduct

There is some confusion surrounding the rule of the Aqueduct as to whether you still get to choose a resource when a 7 is rolled. The rules do however state that if upon rolling for production, you do not receive any resources, then you may take a resource of your choice from the bank.

With Cities & Knights now available to play online, there has never been a better time to try out this expansion with your friends, or perhaps even to make new friends. Start playing Cities & Knights online today on Colonist.io 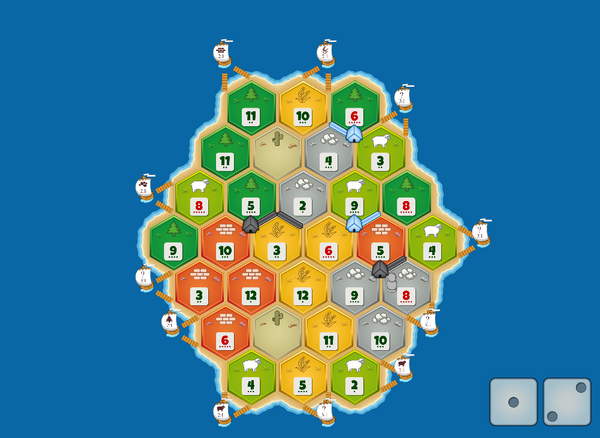 Learn the unique rules for our 5-6 and 7-8 player expansion pack game modes. How large are the boards? What is the special build phase? Click to learn!